Patmos country side tour with Hora & Grotto of Apocalypse 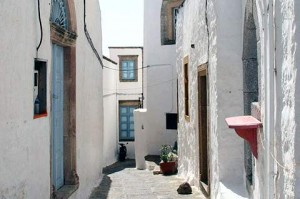 An interesting scenic island tour which has been designed for those passengers who prefer to discover the beauties of Patmos from the comfort of an air-conditioned motor coach.

Start the tour from the port of Scala and drive to the central part of the island, the "Chora", which is the location of the Majestic Byzantine Monastery of St. John the Divine, built in 1088. Your sightseeing will first bring you to the Grotto of the Apocalypse, and then to the windmills of Chora, the "Silent Windmills":  two of them were built in 1588, the third in 1863; when production ceased midcentury, the windmills were abandoned and fell into decay. They have since been restored to aesthetically pleasing, and functional condition.

Afterwards, continue around the island to see its landscape of outstanding natural beauty comprising of rocky hills, dozens of tongues of land reaching out into the sea, tranquil beaches and many picturesque inlets.

The tour ends at the port of Scala to enjoy free time in the quaint and picturesque little town of Patmos. The Arion Café, the oldest and most beautiful café of the town will be waiting for you for a refreshment or a coffee.

REMARKS: Moderate walking involved: moderate amount of physical activity such as walking over uneven surface and climbing stairs. Might not be recommended for passengers with walking difficulties.
The tour includes visit to religious sites, in which knees and shoulders must be covered.