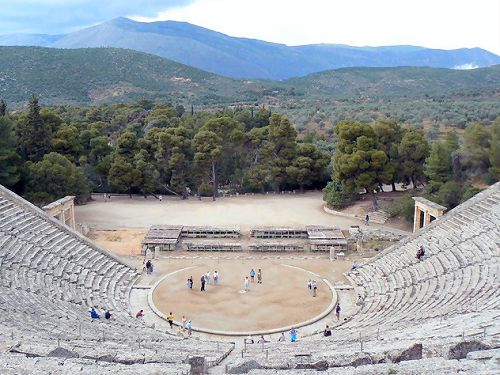 Famed for its spectacular theater and known throughout the Hellenistic world for its unique medical facilities, the Sanctuary of Epidaurus, a UNESCO World Heritage site, was a therapeutic and religious center dedicated to Asklepios. Epidaurus was active from the 2nd century BC until at least the 2nd century A.D., when Pausanias, the traveler and historian, spent some time here, when the city was filled with curative spas. Its principal monuments - the temple of Asklepios, the Tholos and the Theatre, which all date from the 4th century BC - are considered to be some of the purest masterpieces of Greek architecture.

The theater, whose acoustics are extraordinary, was designed by Polykleitos the Younger and is nowadays the most beautiful and best preserved of all of the ancient theaters in Greece: it is marvelously intact and is still used regularly for performances: the late Maria Callas once performed here, and each year the theater is home to the Epidaurus Festival, which has made a tremendous contribution to the revival of classical theater.

The Propylaia, the massive gateway to the Askelpieion, still stands at its northern entrance. Visitors will also find sections of the Sacred Way beneath their feet and a Classical stadium: many of its benches are still standing, and its starting line is still visible!

We depart from Epidavros to return to beautiful Nafplion, where we will take a walking tour of the old city and enjoy some free time before we return to the ship.
Nafplio is one of the most beautiful towns in Agrolis (the Eastern Peloponnese) and one of Greece's most romantic cities.

According to mythology, Nafplion was founded by Náfplios, the son of Poseidon and Danaus (Danaida) Anymone. The town’s history begins in prehistory, when its soldiers took part in both the Agronautic expedition and the Trojan War. A major port since the Bronze Age, Nafplion endured a long decline under the Roman Empire, but grew and thrived as part of the Byzantine Empire, when it was a key commercial and strategic port. In 1203 Leon Sgouros, the ruler of Nafplion, conquered Argos and Corinth, and Larissa to the north. The city saw many fierce battles between the Ottomans and the Venetians, who built most of its medieval quarter between 1686 and 1715. From 1828 until 1834 it was the first capital of liberated Greece.

Nowadays, Nafplio greets its many visitors with its ancient city walls, its castles, its Ottoman fountains, its Venetian houses and its neoclassical mansions. Plateia Syntagmatos, the lively heart of the city, is much as it was in the 1700's. Other important buildings include two Turkish mosques, the Archaeological Museum of Nafplion, which houses artifacts found in the area from the Prehistoric and Mycenaean eras, and the Municipal Gallery, an arm of the Athens National Gallery. Near downtown you will find the Church of Agios Spyridonas and the Church of Agios Georgios, which is home to a number of important murals, including a copy of Da Vinci's "The Secret Dinner".