Izmir, tour to Ancient Ephesus & the House of Virgin Mary 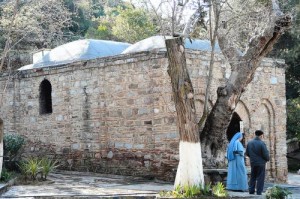 Before his crucifixion, Jesus entrusted the safety of the Virgin Mary to St. John the Evangelist. St.John moved Mary to Ephesus for safety. Virgin Mary lived here until the 101st year of her life. In 1957 the Vatican recognized the "House of the Virgin Mary" as the place where the Virgin spent the last years of her life and since then it is an important pilgrimage site for both Christians and Muslims.

Next stop the city of Ancient Ephesus, the Ionian colony, which is one of the largest open-air archaeological museums in the world. Traces of the Hellenistic, Roman and Early Christian period are scattered everywhere: the Agora, the Odeon, the Library of Celsus, the marble-paved main Street of the Kouretes, the Thermal Baths of Scholastica, Trajan's Fountain, the Public Latrines, the Houses of the Patricians, the Prytaneum, Hadrian's Temple, the Great Theatre.

The excursion is completed at the Covered Bazaar of Kusadasi with some free time for shopping and… bargaining!

REMARKS: Tour not suitable for passengers with walking difficulties.
The tour includes visit to a religious site during which knees and shoulders must be covered.