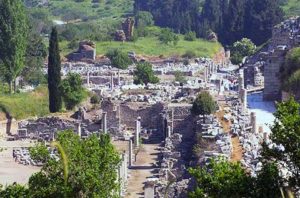 At Ancient Ephesus you find Immortal relics of the Hellenistic, Roman and Early Christian era. At the archaeological site you will be given a guided tour of the Agora, the Odeon, the Library of Celsus, the marble-paved main Street of Kouretes, the Baths of Scholastica, Trajan’s Fountain, the Public Latrines, the Residences of the Patricians, the Prytaneum, the Temple of Hadrian, The Great Theatre.
The finds from the excavations, which have yet brought to light only 13% of ancient Ephesus, reside in the Archaeological Museum of Ephesus, in the city of Selcuk.

Ephesus terrace houses (also known as the "The Houses of Koressus") are located on the hill, opposite the Hadrian Temple and provide us with useful information on the life of rich families during the Roman period. They were built according to the Hippodamian plan of the city in which roads transected each other at right angles. There are six residential units on three terraces at the lower end of the slope of the Bulbul Mountain. The oldest building dates back into the 1st century BC and remained in use as residence until the 7th century AD.

The Terrace Houses are covered with protective roofing which resembles Roman houses. The mosaics on the floor and the frescos have been consolidated and two houses have been opened to the public as a museum. They had interior courtyards (peristyle) in the center, with the ceiling open. They were mostly two-storied but upper stores have collapsed over time. On the ground floor there were living and dining rooms opening to the hall, and upstairs there were bedrooms and guest rooms. The heating system of the Terrace Houses were the same as that in baths: clay pipes beneath the floors and behind the walls carried hot air through the houses. The houses also had cold and hot water. The rooms had no window, only illuminated with light coming from the open hall, so that most of the rooms were dim.

Before returning to the ship, you will have the opportunity to do some shopping such as carpets, jewelry, leather and other souvenirs.

REMARKS: Moderate walking: moderate amount of physical activity such as walking over uneven surface and climbing stairs. Might not be recommended for passengers with walking difficulties.