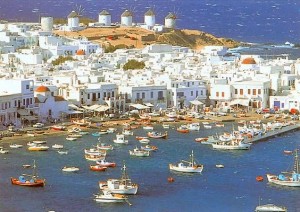 Savor the delights of Mykonos with a foodie tour around the island capital. You'll see the city's highlights and neighborhoods, all while sampling the best food and drink that Mykonos Town has to offer.

We'll start it all with a caffeine kick at Café Barco where you'll be served a traditional coffee and sweet treat, after which we'll stroll past the famous windmills, through the narrow, cobbled lanes of Little Venice and the Three Mills to the Paraportiani Church.
Next, try some Greek peppers and olives washed down with some local raki before heading to Gioras bakery to eat their famous cheese and onion pie. We continue our food odyssey at Popolo where you'll sample local bruschetta, and then it's onto the pretty garden of Cine Manto to taste fresh Greek salad, beer and Mykonian sausage. And last but not least, you'll have some fig cheesecake served with olive marmalade waiting for you at Il Forno di Gerasimo.